In this 90-minute Webinar, participants will be able to join in a discussion about how complexity perspectives to language learning can be researched with a focus on making sense of complex and unpredictable phenomena. We are planning to include a lot of audience participation so we will be fielding and answering questions. We will also encourage audience members to ‘take the mic’ and share their own experiences too.

We will discuss how the Complexity Lens can act as a useful tool for teachers and researchers to ensure that we focus on the actual people in the language classroom and the relationships that take place in real learning contexts.

To attend the event please sign up at the link below: https://forms.gle/amqbkK9eGDks29Cy5

We will email a Zoom Meeting link a few days before the event.

This event is kindly supported by Multilingual Matters and the TEFLology Podcast.

This interview took place between Richard Pinner and Philip Benson via Skype. Philip Benson is a leading researcher and expert on Language Learner Autonomy. He is the author of several books on Autonomy and currently teaches at the Hong Kong Institute of Education.

RP: First, the new edition of your book. Is there anything new in there that wasn’t in the first edition?

PB: Yes, there’s a lot more. It says on the description of the new edition that there are over 300 references added. The first edition came out in 2001, and at the time I tried to do all I could to gather the most important aspects in the field from the last 30 years. But in the last ten years or so, a lot of new work has been done and the amount of research has almost doubled, all in just the last ten or so years. There have been a lot of important developments since the first edition, so the second edition brings everything up to date. There’s also a section on teacher autonomy there too, which wasn’t in the first edition. Also, in the first edition there was already a section on technology, but that’s been significantly expanded now. Obviously the technology then and now has developed a lot, particularly in things like communication and the widespread use of the internet.

RP: So well worth purchasing, even if you have the first edition. I’ll have to go on amazon, because I’m still on the old edition. When I saw you speaking at Temple University, Japan, which was part of the Distinguished Lecturer series that they offer, you dedicated a fairly significant amount of time to your definition of autonomy. Is that also something that is new in the second edition?

PB: No, actually that is work which mostly carries across from the first edition. What I’ve been doing recently is investigating the idea of capacities for control, but that definition hasn’t changed since 2001. I don’t think it’s useful to add more definitions and to keep trying to come up with new ones. Obviously, what we need to do is to drill down into it, rather than widening the definition beyond something that’s useful. I think if we are going to get anywhere then we all need to be talking about the same thing and using terms in the same way. In my definition, I refer to autonomy as “a capacity to control learning” and I’ve just been trying to further define each of those terms.

RP: So, how did you first get involved in working with autonomy?

PB: Well initially it was through technology and my involvement with CALL. Basically, in one of the places I was working they decided to set up a self-access centre, and because I was into computers they asked me if I wanted to be involved in that. When I first started working in autonomy, I suppose I was initially approaching it from a self-access viewpoint, but of course the more I got into autonomy, you know it developed and there is a lot more going on.  I have a background in CALL. Back in the 80s and 90s CALL was about creating programs or applications for language learning. But now, CALL also features an aspect of globalisation –of how people are using technology socially now. Technology has really advanced, so, it used to be that you would look at a program and think “how can I make this better for language learning?” and you would develop the software. But now, you can’t possibly create anything as good as what there already is. You couldn’t create anything better, than, for example YouTube.

RP: … and you said that when students ask you, or you know, say that they would like to write their thesis on the link between autonomy and motivation, you usually advise them not to do it!

PB: Yes, well. I think the thing with autonomy and motivation is that, as you say, there are some strong conceptual links there and in fact there is often an overlap in the terminology. I mean motivation, it was really Deci and Ryan, when they proposed Self Determination Theory, autonomy is a component of that. What they argue is that motivation is dependent on three things; autonomy, competence and relatedness. They talk about autonomy as a kind of freedom. In my breakdown of the term “capacity” in the definition of autonomy, I talk about freedom as being part of the capacity for control, and that’s obviously an aspect of autonomy but I think they are slicing the cake differently.

RP: So when they talk about autonomy in Self-Determination Theory they are talking about the freedom to be able to choose what they learn rather than being forced, say, by having to do a compulsory course?

PB: Yes, I think so. So I think that we are in agreement there, but for me autonomy is about more than just freedom as well, there are other things that we look at when we study autonomy.

RP: Right, I see. I’ll have to bear that in mind when I work on my PhD because my tutor is Ema Ushioda, and she was primarily concerned with autonomy and then she got into motivation research through that.

PB: Yeah. Well, as I say there are strong links between the two, but as I said in the lecture at Temple, there is a widespread problem in Applied Linguists in terms of defining abstract concepts, such as autonomy and motivation.

RP: And I’m foolishly trying to tie up three of them in my research. Sounds like I need to do a lot more reading. Do you have any new books coming out in the near future?

PB: Yes, actually, a few things coming out soon. At the moment I am working with sociocultural theory. There is a new book coming out, which is one I’ve co-edited with Lucy Cooker. It’s called The Applied Linguistic Individual: Sociocultural Approaches to Identity, Agency and Autonomy and it’s part of the Studies in Applied Linguistics series published by Equinox. It’s going to feature chapters from experts in the field of sociocultural theory, such as people like James Lantolf and Martin Lamb. One of the criticisms some people have levelled against autonomy research was that it was too individualistic. This book aims to bring the importance of the social context of autonomous learning out. It’s an examination of how individuality is conceptualised. So that’s been really interesting to work on and the book is coming out at the start of next year. The other book that I’m doing is called Narrative Inquiry in Language Teaching and Learning Research which is published by Routledge in the Second Language Acquisition Research Series. I’ve co-authored this book with Gary Barkhuizen, and Alice Chik.

RP: So you’ve been very busy recently I take it?

PB: Always busy. But in terms of current research, right now I’ve been looking at a lot of what happens outside of the classroom. Again, going back to YouTube, there are thousands of people out there it seems who are using YouTube for language learning. If you look at the comments below the videos, it seems very clear that a lot of these people are practising their second language skills, and there is evidence of them using YouTube for development. Now, there are lots of people doing what we call “translanguaging” which is things such as  a Chinese star speaking English in an interview, or an American singing a song in Chinese in Taiwan. And if you look at the comments on there, there is a lot of evidence of language learning taking place. There are people commenting about accent or pronunciation, sometimes aspects of grammar. This is a project that I am currently working on at the moment.

PB: Ok, thanks very much. 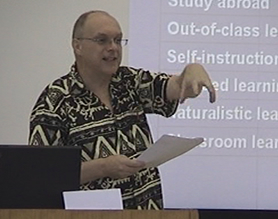