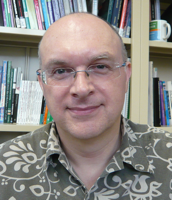 I attended the lecture given by Professor Phil Benson as part of the Temple University Japan Distinguished Lecture series. Previously I have attended a talk by Ema Ushioda in the same series and I always find them to be of interest. The first three hours are free, but for a small fee of 12,000 yen you can attend the full weekend of workshops. Sadly, due to work commitments I was only able to attend the first three hours. What follows is a breif description of Professor Benson’s lecture.

Phil Benson is a leading expert in the field of learner autonomy, and he literally wrote the book on it.

Professor Benson works at the Hong Kong Institute of Education.

Benson started off the lecture by talking the difference between learner autonomy and autonomous learning about what he had identified as the six different definitions of autonomy.

Benson’s own definition is the last one in the table, that learner autonomy is “a capacity to control learning.” He then went on to expand on this and to break the components of capacity and control down into how they relate to the learner and their context.

What is a capacity?

When talking about the word desire he explained that he had purposefully avoided the term motivation because of what he termed to be a widespread problem in the field of applied linguistics in defining abstract concepts. He went on to explain that Autonomy suffers from the same issues, i.e. that short definitions tend to be too broad and all encompassing, whereas longer definitions exclude too much. He acknowledged the overlap between authenticity and motivation, but joked that when students wanted to write their dissertations about the links between autonomy and motivation he usually discourages them from doing so because it would be too much of an abstract set of concepts.

Benson then explained what he meant by control. He had done a meta-analysis of the research in order to see how the word control was used in relation to language teaching and learning. This lead him to arrive at the following categorisation, which he explained whilst pointing out similarities with the term capacity, although the two do not map perfectly onto each other, he noted.

For Benson, autonomy has moved a long way from being synonymous with self-access or self-study. For him the autonomy debate is much more of a conceptual question which relates directly with what approach is used in class and how teachers and learners interact in and around the classroom. However, he acknowledged that much of the work on autonomy focuses on adult education and his current research at the Hong Kong Institute of Education has brought him into contact with teachers who work at schools with young learners. He sees no reason why autonomy should be limited to adult education.

He also quipped that in many ways the teacher is seen sometimes as the enemy of autonomy because they impose what is learnt on the students, preventing them from choosing themselves. Benson advocated that ‘control over the learning content’ or learners having a choice of what is learnt is central to autonomy. For me, this is what made the session very relevant to my own research into authenticity. Benson’s ideas on the need for interest and choice in the content being used for language practise strongly coincide with my own on authenticity (see Pinner 2013)

Benson also talked about who controls the learning, and how there are many constraints on autonomy. He mentioned a recent study he had done (Benson, 2010) where teachers had attended an autonomy training seminar, but said after that they could not initiate such a methodology in their own class because they thought parents would complain, despite the fact that no parent had ever previously complained about such an approach. Finally, Benson talked about how students learning experiences of constraints of autonomy are all mediated through teacher. Despite pressures from the government and the department heads all influencing the teacher, the students’ experience of this all comes directly from the teacher and thus teachers are usually seen as the ‘enemy’ of authenticity.

This led the session onto a discussion about teacher autonomy. Benson said that teacher autonomy may be an unuseful [sic, un-useful as in not very useful but not useless] phrase because it is very different conceptually from learner autonomy. Unfortunately in the three hour session there was not enough time to get into detail about this, and this was another reason why I wished I could have attended the full weekend session.

Overall this was a really enlightening session and I took a lot away which I think will be useful in my research. I gained a better and updated view of what autonomy is and how it is being researched today.