The theme of this years’ EUROCALL conference was languages, cultures and virtual communities.

Here is a video-podcast I made of the conference.

You can find out more at the EUROCALL site 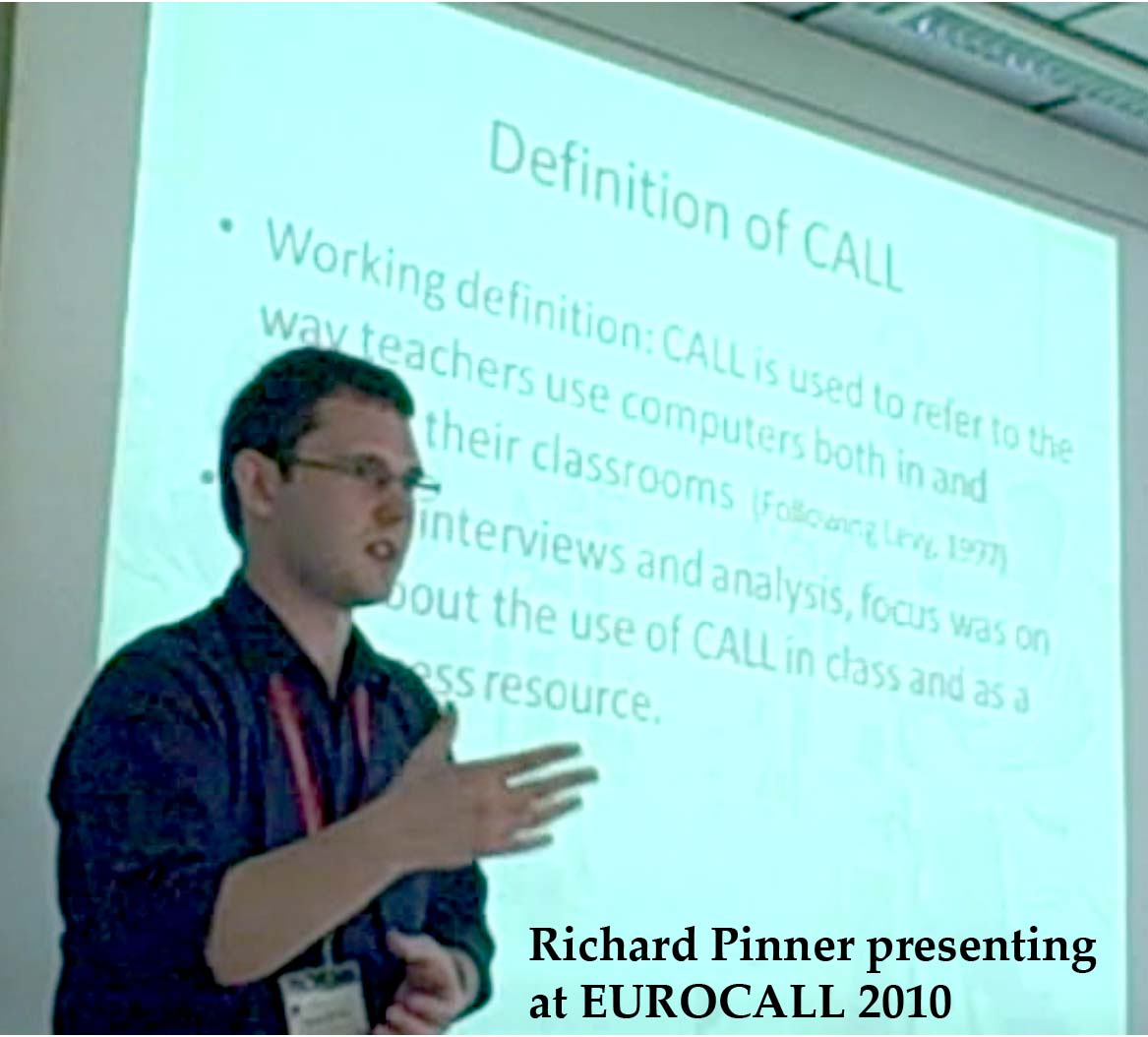 This presentation is based on research conducted as part of my master’s dissertation in Applied Linguistics and ELT at King’s College, London (supervised by Dr. Nick Andon). The slides from the presentation are available to view here or download in PDF.

Teachers’ attitudes and motivations for using call in and around the language classroom
View more presentations from Richard Pinner.

You can also watch the video here

Teachers’ attitudes and motivations for using CALL in and around the language classroom from Richard Pinner on Vimeo. 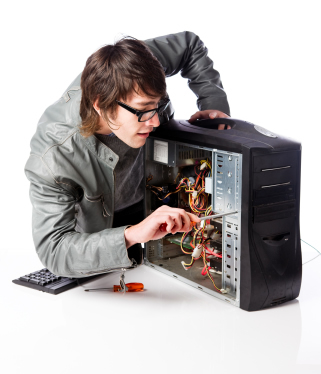 WD40 is the magical sprayable oil which can fix almost any mechanical problem with a few well placed squirts. It is a mechanic’s best friend.

Sadly, WD40 does not work for computers, in fact it would probably not do your computer much good at all! When you are using an Interactive Whiteboard (IWB) for teaching, or any type of computer based applications, things almost always go awry. Believe me, I know!

Having worked as multimedia coordinator with hundreds of computers, where I supported not one but two flagship schools in central London which had both staff and student machines, each with a multimedia room and one with an additional computer lab, I have done a lot of trouble shooting both for my own and other teachers’ classes. One of the most common mistakes people make is to overestimate the power of their computer.

It is difficult to remember to conduct the basic maintenance that keeps a computer running efficiently when you are using it in front of a class. People tend to open up hundreds of new tabs on their browser, running very processor heavy sites such as BBC iPlayer, without closing windows which are no longer needed, or keeping other applications running in the background. IWBs often come with their own software and usually they are connected to low-spec computers which the school or institution buys en mass on the cheap, so don’t overwork them. If you want to keep your computer and IWB running and avoid crashing it, keep open only the windows and programs that you need and close things down when you are done.

Although I just told you to close windows, you still need to watch out for overheating issues.  The computer’s CPU produces a huge amount of heat when it is running, as much as the filament of an electric kettle. Overheating will cause your computer run more slowly and eventually crash. Think about the position of the computer. All computers have fans and vents, make sure these are not pointed at a wall or enclosed by a desk, as this will reflect the heat back into them. Also, don’t put things on the computer, as this can again lead to overheating. Another overheating risk comes from running too many applications and keeping too many windows open. The final thing you can do to avoid overheating is to ensure that the computer is not left on all night. Turning it on and off after each lesson may not be practical, but shutting it down each night will keep it running for longer and also is much better for the environment. You can create a scheduled task in control panel using a batch file which means that the computer will shut down automatically at a specified time each night. Just be sure that you remember to turn off the monitors and projector screens as even in standby these use a lot of power and again this is bad for the environment.

The computer will also run faster if you only have programs installed which you need. Many programs, such as apple Quicktime, will start themselves and run in the background upon startup even though you’re not using them. Check which programs are running in the startup and remove them from the registry to make the machine more efficient. You can also speed up the computer by ensuring that all the temporary internet files have been cleaned off, and that you defrag your hard drive often. By default, most Windows installations are set to use Virtual Memory, which is hard disk space acting as RAM. If your hard disk gets full and the Virtual Memory quota cannot be met by the physical remaining space on the disk then the computer is prone to crash.

If you are not sure about any of these things, ask your IT support to check them all. If you don’t have an IT support then you should ask your school or institution to hire someone in for the day to check all this, or do it yourself using online tutorials and ask for a pay rise!

Computers are sensitive animals. Many of them are made to work like slaves for long hours in hot sweaty conditions. It is not unknown for computers to be badly beaten when the pressure is too much and they begin to flag. This is not wise if you want your computer to work like a well oiled machine. If you click on something and it doesn’t work instantly, this means the computer is running slowly. Often people then fire a volley of double-clicks at the computer, which just means you are asking it to do the same job hundreds of times. Nothing slows a computer down faster than this clicking spree. Be patient with your machine, and don’t be fooled into thinking that whacking it has any effect.

If you combine all these small tips, you will notice a marked increase in the speed of your machine. If the machine really is a piece of junk, you can always buy more ram or re-format the hard drive and see if that makes it any quicker. Failing all this, ensure your school or college invests in decent hardware, but even if your machine is a top of the range machine, remember that a little love goes a long way and that there is no oil in a can panacea to make it run reliably unless you use it sensibly.

The question of when to use, and equally as important – when not to use, technology in class has been a question that sadly gets left out of many of the discussions around new learning technologies. Unfortunately, a lot of the choices about tech in class come from a top down implementation. So, your school gets a load of new interactive whiteboards. They give you a 1 hour training session, remove all the old whiteboards and say ‘off you go then’. Questioning their practicality often gets you branded as ‘negative’ or even ‘anti-progressive’.
Happily, there are those who dare to ask questions about this approach to instructional technology. People like Mike Levy, Phil Hubbard and Greg Kessler (among others) have voiced their concern over ‘tech for tech’s sake’ and this is coming from the leading CALL experts and advocators. Interactive whiteboards, for example, don’t do things that normal ones do. You can’t have more than one person writing on it at the same time, for example, so if you are doing a spelling race or something like that you won’t be able to use it. A lot of great software and apps are being released at an amazing rate, but all too often they are put into use without prior evaluation. As CALL practitioners we need to ask ourselves, is this useful? How so? When would this be useful and when would it not? These questions are not dissimilar to the questions teachers ask themselves when planning or evaluating any resource for a lesson. You don’t need to be an expert to conduct this kind of evaluation either.

A good example is a Blended Learning Lesson Plan I wrote myself for use in my institution. I was thinking about this lesson from a very top-down perspective, I’m sorry to say. I was concerned our Moodle forums were underused, so I thought ‘how can I get these forums to be used in class?’ I created a lesson plan where the whole class is taken into the computer room and forced to use the forum to post a response to something.
Not only did this only mean that forums were used a lot for the hour of the class and then never again, it was also questionable pedagogically. Why make people communicate over a forum when they are in the same room as each other? In the pecking order of communication, face to face is always best.

Forums are powerful collaboration tools, but the point is to allow asynchronous sharing and knowledge. The same lesson applied to learners who are in a separated by time and space would be great, but not if they could just have easily have actually spoken to each other.
We are at a stage now where technology is so ubiquitous that we are not always so keen to implement it for its own sake. We need to critically evaluate the new item, see if it works, decide what it is good for and what it is not so good for.

I woul like to invite you to post your comments about any new piece of technology you have used in class. Was it useful? What can it do well? What are its limitations?

There is a brilliant book entitled ‘Teacher Education in CALL’ (Hubbard and Levy eds. 2006) which details the current state of CALL teacher education – some of the predominant findings are that there is not enough CALL Teacher Education going on as part of INSET or PRESET training, and even when CALL is part of Teacher Education programs it is often considered unsatisfactory in terms of preparing teachers to actually use CALL applications in class.

I decided I would expand the idea by adding a post here. By joining the free mailing list TESLCA-L you can read the archived postings and also add to them, or alternatively leave a comment here on this blog about the subject.

We look forward to reading your postings!