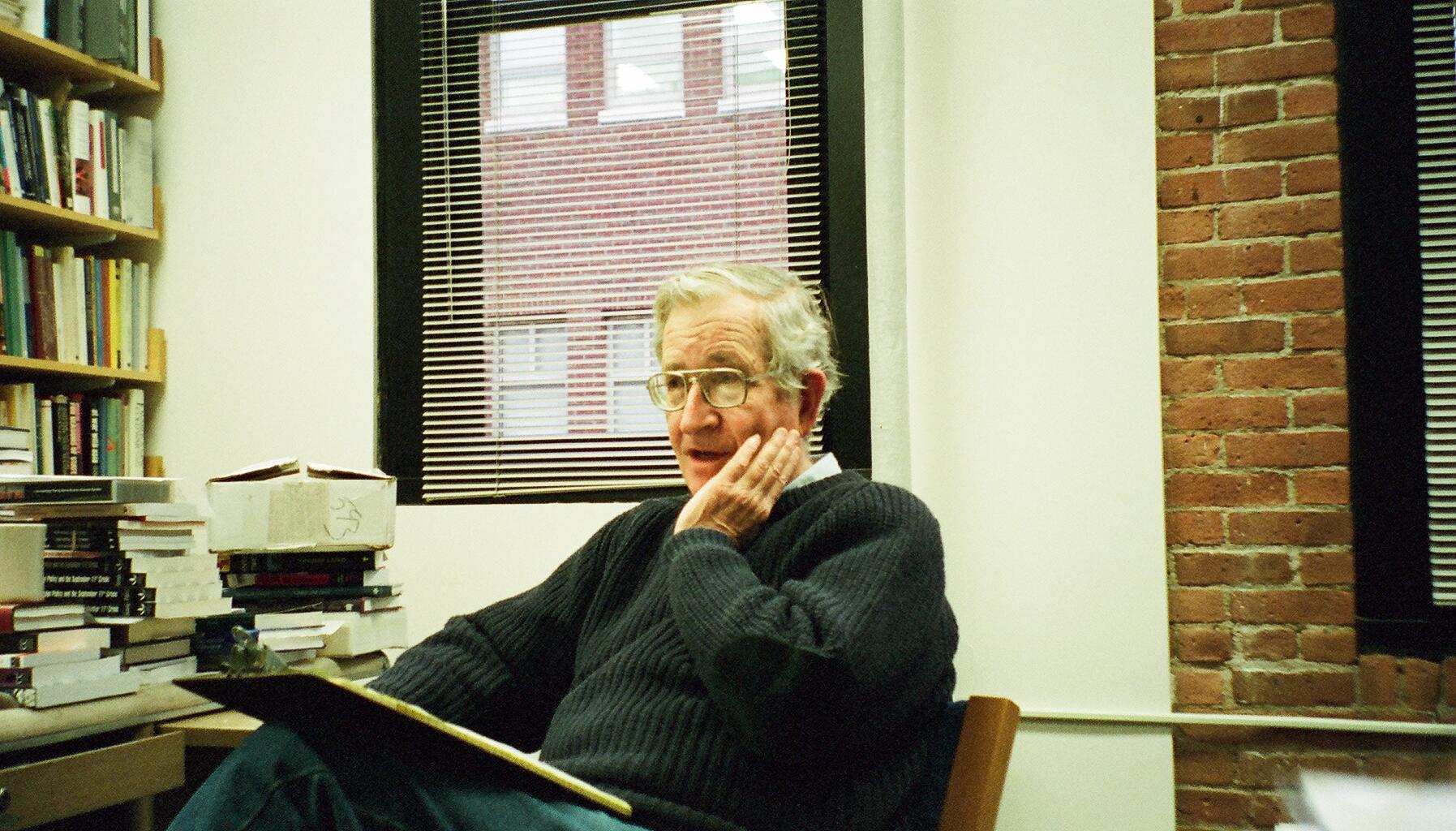 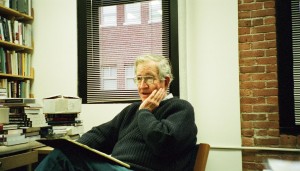 Today on a very rainy day in Tokyo, I had the pleasure of watching a softly spoken 85 year old man stand in front of a microphone, speaking and answering questions on such diverse topics as chimpanzees, bird songs, software programs that try to pass university entrance exams and the choice of whether to use a hammer to build a house or bash someone’s face in. The speaker was Noam Chomsky, the world’s most cited living author.

I knew I might not get to see the Chomsky lecture. Seats were limited to 700 places and they were likely to be gone quickly. It was being done on a first come first served basis. What I didn’t know was that they were available from 8 am. When a student told me this at around 10:30, adding they were almost all gone, I ran to the auditorium but of course too late. This preamble is necessary as it was only thanks to my friend and mentor Makoto Ikeda that I was able to get to see the lecture, and not only that but from a seat from which, if I had wished, I could have thrown a screwed up piece of paper and seen it bounce of Chomsky’s head.

In the language instinct, Stephen pinker (a former colleague of Chomsky’s at MIT) mentions something about Chomsky being a pencil and paper theoretician. So, despite having a very cool poster for the lecture series event and lots of screens, theses were all turned off at the start of the event. Chomsky delivered his lecture with only a few pages of crumpled notes.

Chomsky was introduced twice and then, to my surprise, stood up to deliver his lecture. For an 85 year old to make his way all the way to Japan and still be lucid enough to deliver such a deeply technical lecture was impressive, but to do it standing I thought was just downright cool. He was cool, as well. In truth, being an applied linguist myself rather than a linguist, Chomsky sort of orbits my world rather like an impressive comet. Going to see his lecture was kind of like going to a rock concert for me. I didn’t expect to enjoy it in the moment so much, I just wanted to be able to boast that I had been. It was the experience I was after.

He did raise interesting points. His citation range was very deep, mainly historical and philosophical. He talked about Darwin on language and the meaning of ‘foremost infinite’. He also quoted Galileo on the alphabet being “an achievement surpassing all recognition”. But he was also contemporary and contextual, citing an article which had appeared just that morning in The Japan Times about a machine which could pass the Tokyo university entrance exams. He did point out that the machine was pointless, saying once it got in to University it would be finished.

Other choice moments were when he said language allowed for innovation without bounds, as language can engender thoughts in others. He also mentioned Humboldt, who said language made infinite use of finite means.

Then it got a bit technical, and some heads began to nod. Chomsky was talking about X + Y merge into Z and he kept saying merge over and over again. So I decided to survey the audience quickly and take stock of the cross-cultural elements and simultaneous translations that were taking place to accommodate people from diverse linguistic backgrounds. This is a strength of Sophia University and one that makes me proud to work here. There were people doing simultaneous translations into Japanese which was being relayed by headphones wirelessly. Pretty good. But most interesting were two separate sign-language camps. People were sitting in these camps and watching signers who had a feed to Chomsky’s microphone. What made this doubly impressive was that Chomsky, as I mentioned, is a soft spoken man. His sentences contain a lot of asides and can get quite embedded. He’s a mumbler too. All of which is part of his endearing demeanour but I couldn’t help but think that Chomsky wasn’t the only impressive linguist in the auditorium that day. I especially wanted to make a point of mentioning those heroic people who made Chomsky’s talk accessible for others.

It was a very interesting talk, and I felt a great buzz to be in the presence of such a famous man who I respected (note, there are more famous people than Chomsky who I wouldn’t throw water on if they were on fire in the street – celebrity isn’t a big wow for me). Great lecture or not, clearly the Q&A was always going to be the most interesting part. Even if you evaluate it only on the purely quantitative basis of how many notes I took. Looking back over my notes, Chomsky’s entire lecture, which lasted almost exactly an hour, took up two and a half pages of my little notepad. The Q&A took up five pages.

The first question was, in my opinion, the best. A girl stood up, thanked Chomsky for the lecture and then asked him a long question basically about his view on how language is used for some ill purposes, such as propaganda or worse when people don’t speak out at all when they should. It was a heartfelt question and one which beautifully synthesised Chomsky’s two main areas – linguistics and human freedom. His answer was fantastic. He said:

Now that I write this up I find it interesting that he used a tool as his central metaphor for language, which reminds me of Lev Vygotsky.

Other choice quotes which I scribbled down as close to verboten as I could manage include:

“The States don’t need a State Secret Act if people are so obedient and conformist that they don’t question what’s in front of their eyes.”

He also talked about, following George Orwell, how ideas can be supressed without the use of force by the media and their agendas, which often lie in the pockets of wealthy capitalists. The media mind-control experiment is quite sickening to behold on a global level. Especially in so-called developed nations where we have a notion of free-speech, because there are observable trends in which freedom is becoming endangered right under our noses because we are lulled into a fake sense of security. Chomsky also said:

“Our intuitions about the world are a starting point for inquiry, but we can’t rely on them.”

An excellent call for people to exercise critical thinking, starting with their own beliefs and prejudices.

As a language teacher and applied linguist though (and also wanting to keep politics out of it since that’s the theme of his lecture tomorrow) I was very happy when a fellow British member of the audience asked:
“Is there any way your theories can apply to second language acquisition?”
To which Chomsky replied:

That got a few laughs, but it also confirmed something I already knew about Chomsky. He’s not a language teacher, he’s a linguist.

Also worth mentioning was the rather odd moment when a person in the audience got the microphone to ask a question and then asked if he could use Japanese. There was an almost audible groan from the audience, I could feel the prickles as people wondered “who would come to a Chomsky lecture and ask him a question if you can’t even frame it in English?” Chomsky was trying to use a special headset so he could get the simultaneous translation. There was a bit of feedback from the microphone. The audience awaited the offending question. It was asked. I really had trouble understanding it, and unfortunately I couldn’t catch what the guy asked. It seemed to be something about building a house. It seemed to be related the first question, asking about his politics. The curators were making signs to each other to move on to another question, which was done swiftly. The next question came from on of the signing groups which I mentioned earlier. The signer stood up and signed his question to the interpreter. She translated it from Japanese Sign Language into English with an effortlessness that was impressive, and the question was beautifully simple. The man just asked “Are you interested in sign language” to which Chomsky basically replied “yes”, although in a lot more words. Another question came about music and language, and that’s how the birdsongs came up. There was another question about signing and Chomsky mused “do signers dream in sign?” indicating a possible area for research. And then the questions were over and the auditorium filled with applause.

For me, the most impressive thing was that Chomsky’s lucid mind (which must have been jet-lagged as well) was able to listen to questions on such a wide range of topics, many of which outside his specialism, and answer each one with relevance and insight in a way which was truly inspiring to behold.

Sadly I won’t be able to attend the lecture on politics tomorrow because the tickets are all sold out. Despite working at Sophia I was too late to reserve my seat and, as I mentioned earlier, I almost didn’t get to watch it today either. But it was hands down a fascinating and inspiring experience. Thank you again to Makoto Ikeda for getting me the seat, thanks to Sophia and SOLIFIC for organising the event and thanks to Noam Chomsky for coming all the way out here to engage our minds.

You will be able to watch both the Sophia lectures at this link http://ocw.cc.sophia.ac.jp/

18 Replies to “The Architecture of Language Reconsidered: Noam Chomsky Lecture”

Japan could begin seeing regular temperatures over 50 degrees in the next five to ten years. Time to do something about it! https://japantoday.com/category/features/kuchikomi/hot-and-hotter-this-year%27s-high-temperatures-a-prelude-to-a-much-much-warmer-japan#.Yu-jud46fpR.twitter

Duolingo throwing up some interesting sentences...

On train up to Nagano for @JALT_PanSIG conference. Very excited to be attending a face to face event after so many years of 2D!!! Except I've forgotten how to Shinkansen